Smart ultrasound tool to scan for liver steatosis: “Everyone should have one”

In the Swedish city of Östersund, the regional hospital has taken ultrasound-based liver examinations to a new level after adding a new ultrasound-guided attenuation parameter functionality to the diagnostics toolkit.

As a PhD and as a diagnostic medical sonographer, Marie Byenfeldt knows her craft in both theory and practice. At Östersund Hospital, the main hospital in the vast Jämtland region in northern Sweden, she has earned her reputation as a specialist in performing ultrasound-based shear wave (SWE) elastography of the liver, and as a trainer for radiologists from other parts of Sweden, seeking advice and insights into liver diagnostics. 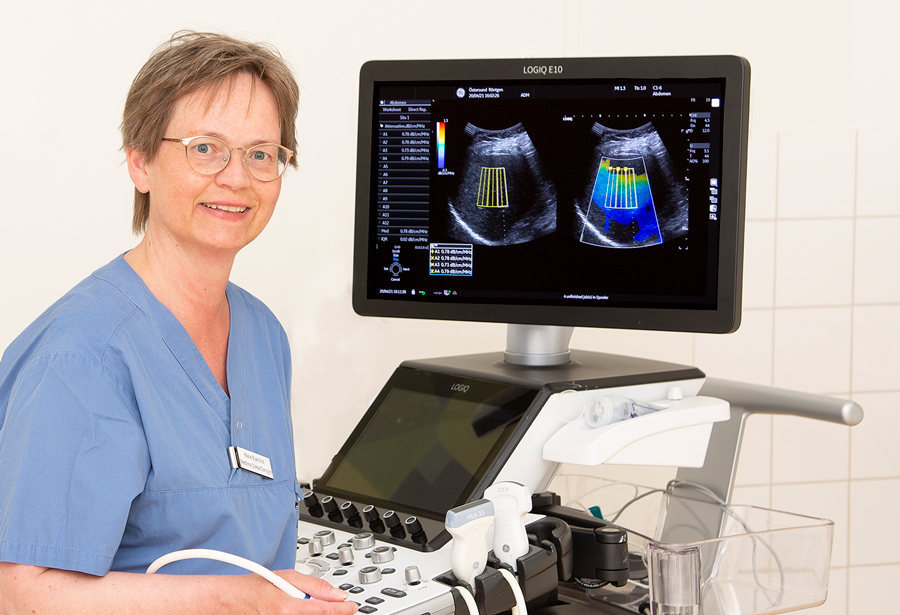 As problems with obesity continues to grow not only in Sweden, but around the globe, the prevalence of non-alcoholic fatty liver disease (NAFLD) in general, and of non-alcoholic steatohepatitis (NASH) in particular, is an equally growing concern. In all likelihood, this will increase the demand for efficient methods to detect steatosis in the coming years. As Marie Byenfeldt explains:

“The fact that we are in the middle of an obesity pandemic also means that we are in the middle of what I like to call a pandemic of fatty livers. In many ways, the liver is a fantastic and fascinating organ that is able to heal itself if you treat it well through your diet and your physical activity. But only to a certain extend. Many people are not fully aware that obesity not only can increase the risk of metabolic syndrome and cardiovascular diseases, but also causes steatosis that can lead to liver fibrosis, to cirrhosis and ultimately even to liver cancer. In fact, the amount of liver transplants due to NAFLD has increased in the Nordic countries in recent years.”

“That is also why I hope and believe that a UGAP functionality will be standard feature in most radiology departments within a few years as an important component when performing a liver examination combined with an elastography and to keep up with demand – everyone should have one.”

“I hope and believe that a UGAP functionality will be standard feature in most radiology departments within a few years as an important component when performing a liver examination combined with an elastography and to keep up with demand – everyone should have one.” Marie Byenfeldt, PhD Sonographer, Östersund Hospital.

Finding steatosis through an attenuation parameter

During the past year Marie’s main ultrasound system for performing liver examinations in research purpose and clinically has been GE Healthcare’s LOGIQ™ E10 and the included ultrasound-guided attenuation parameter functionality, mostly referred to as just the UGAP. In short, the UGAP technology enables the sonographer to detect the level of fat in a liver by measuring the reduced ultrasound waves echoed back from the liver examined, i.e., the attenuation parameter. Basically, the more attenuation, the higher the level of steatosis in the liver.

“Similary as current B-mode ultrasound technique where the liver parenchyma is compared to the right kidney for detection of steatosis, increased measurement results with UGAP is also a sign for chemical and/or drug induced liver injury, or iron overload as in hemochromatosis. The increased attenuation in the liver is a sign for a liver in a hard fight.”

When Östersund Hospital chose to invest in GE’s LOGIQ E10, the speed, reliability and ease of use of the system were decisive factors. But equally important was the ability to get the UGAP functionality that is built into the E10, explains Marie Byenfeldt.

“Before, when using a normal ultrasound image, I was only likely to identify the moderate and severe cases of hepatic steatosis. But with the UGAP, I’m also able to detect milder symptoms – and, hence, to detect the condition in earlier stages. Obviously, the earlier you can detect liver steatoses, the better, and in my daily routine the UGAP has now become a key part of my diagnostic tool bag when I perform examination of the liver, often combined with the shear wave elastography to detect early stage of liver fibrosis.”

“(…) The UGAP has now become a key part of my diagnostic tool bag when I perform examination of the liver, often combined with the shear wave elastography to detect early stage of liver fibrosis.” Marie Byenfeldt, PhD Sonographer, Östersund Hospital.

The importance of having a benchmark number

With the UGAP, the sonographer doesn’t have to study and interpret the ultrasound image in the same manual way as before. Instead, the UGAP produces numbers, the whole examination requires 5 measurement and the median value is used. Via an algorithm the attenuation in the liver is measured using the unit dB/cm/MHz (decibel per cm per MHz). The median value is transformed into four simple numbers, ranging the steatosis grade from S0-S3. Zero equals normal fat level in the liver (< 5 % of the liver cells is transformed to fat), and S3 a case of severe fatty liver (≥ 67 % fat in the liver)*. Optimal cutoffs obtained using liver biopsy and proton density fat fraction with magnetic resonance imaging (MRI)**.

“This may not sound as such a big deal, but it really is very helpful in number of ways. First of all, it makes it a lot easier to benchmark across different diagnostic methods and to establish if a case of steatosis is in progress or in regress. Secondly, it also serves a kind of pedagogical purpose when the referring doctor explain the severity of a liver condition to a patient – and not least to motivate the patient to do something about it. Moreover, liver biopsy is an invasive method to establish steatosis grade, but with this non-invasive UGAP, examination can be performed several times as a follow-up after treatment, like physical training and diet.” 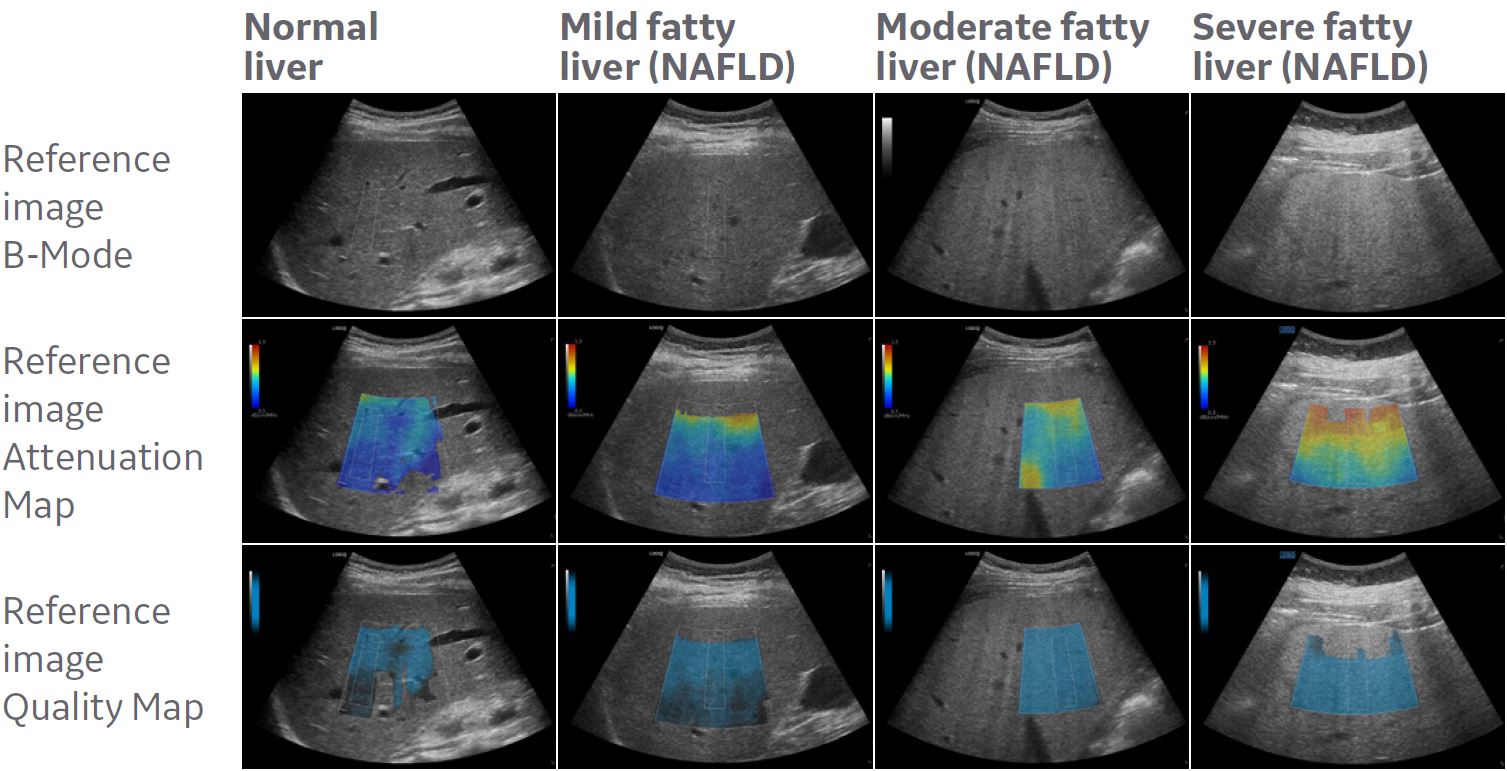 UGAP a tool for the referring doctor as well

Before getting the UGAP, the non-invasive quantitative method to grade steatosis was by using MRI. But this is not an option for all patients, and also a more expensive – and a lot more time consuming. Now, a full multiparametric liver examination including liver elastography and UGAP, takes barely 20 minutes in general, including writing report. The UGAP process itself usually takes a minute or even less. The ultrasound method is rapid, cost-effective, reliable and non-invasive.

“In some ways, it’s just easier to relate to a concrete number than to being told that you have a serious liver condition, which makes it easier for the referring doctor in health discussion with the patient.”

Equally important is the fact that the UGAP helps make the outcome of the examination less dependent on the individual operator. The previous technique, with ultrasound B-Mode, was subjective using bright liver and hepatorenal echo contrast, deep attenuation and vessel blurring which may vary depending on the imaging parameters used and/or the examiner’s technique. Instead, the UGAP allows for a much more objective approach based on quantification of ultrasound data. Moreover, early stages of steatosis is frequently missed using B-mode ultrasound, but is detected by the UGAP. The earlier a liver disease is detected, the earlier a treatment can be started which is a huge benefit for public health.

“You still have to be an experienced sonographer or radiologist and know how to hold the probe in order to get the best acoustical image. When that is the case, in my opinion, there is hardly any learning curve at all when starting to use UGAP, or the overall LOGIQ E10 system for that matter.”

“Last year I held a lecture for a group of radiologists. I showed them ultrasound images from the same patient performed at the same day but examined through different frequencies and different body positions – and they couldn’t tell that it was images of the same liver and suggested different steatosis grade for the images. To me, this also shows how important and relevant this method of quantification is.”