GE Healthcare’s factory in Finland during COVID: Patient monitors are being assembled,
configured and shipped for most of the world.

As the big wheels of the world began to slow down in March, and in some places even came to a complete stand still because of the developing COVID-19 pandemic, things were just starting to heat up in the suburb of Vallila on the outskirts of the Finnish capital of Helsinki. This is where GE Healthcare assembles, configures and ships patient monitors and gas measurement modules for most of the world except for the Americas and parts of the developing world.

In his office, Risto Rossi, Senior Global Product Manager at GE’s patient monitoring division, clearly recalls the days when the whole world seemed to call him with requests for more monitors.

“There is a first time for everything, and this was certainly the first time I was approached by customers who were close to panicking when asking for delivery of monitors. Some were even saying: “We will buy everything you have if you can deliver within two weeks.”

“But monitors are custom-built devices, that have to be assembled and configured specifically in order to meet the customers’ needs and they vary a lot. We don’t have some thousand monitors on a shelf in a storage facility just waiting to be shipped. That is not how it works.”

“Ventilators can’t be used properly without a monitor.“

Basically, doctors monitor a patient through the doctor’s own experienced eyes and through a monitor that compiles all relevant metering and measurements from a patient, e.g. heart rate and pulse, blood pressure, respiration and ECG to name a few.

“In the media, there was a lot of focus on the need for ventilators in the treatment of patients with severe COVID-19. But monitors are just as important, because ventilators can’t be used properly without a monitor to measure, how effectively the patient is getting oxygen, how well the lungs are working, if the heart rate is okay etc. Without this combined picture of the patient’s current condition, the doctor at the bedside is to a large extent left in the dark,” explains Risto Rossi.

“We wanted a fair and compassionate way of prioritizing.“

The demand for monitors began to grow in February, but slowly. Then in March, the demand went through the roof and then demand followed the spread of the virus. At the plant in Vallila, they didn’t have to watch the news to follow the current Corona hot spots around the world. They just had to look at where the requests came from.

“We felt the pressure for sure. Every country, every region, every hospital, every doctor essentially wants to have enough of our monitors in order to treat their patients and to be prepared for an unknown influx of even more patients. No one wants to wait. Everyone feels that their need is particularly important and vital, and I can absolutely relate to that.”

“But we soon realized that we couldn’t possibly meet all requests at the same time, and so we decided to set up a transparent prioritizing system based on the urgency in each country, so that big countries and markets didn’t get monitors first just because they were big. We wanted to set up a fair and compassionate way of prioritizing who would get monitors first and who would have to wait a bit.”

Through discussions in the cross-functional taskforce that GE Healthcare set up as one of the first actions, the model for prioritizing was set to be based on certain key factors: the number of recorded cases of people infected with Corona virus, the number of patients hospitalized with COVID-19, on the number of patients in intensive care units and deaths due to COVID-19.

“It felt like playing the video game ‘Whack-A-Mole’, where you have to hammer down a mole each time it pops up from a new hole. New problems popped up constantly, and we were hammering away.”

As the requests for more monitors began to grow, the strain on the supply chain was soon felt. Modern supply chains are very Lean and optimized on the premise that components and parts are available when needed. The idea being, that if you can avoid having costly products on storage, you will want to do that. But lean supply chains are not made for pandemics and global lockdowns.

“Luckily, our supply chain is quite diverse. We have suppliers from all over the world, so we did have some maneuvering space to change between suppliers as all sorts of different problems kept popping up along the supply chain. It felt like playing the video game ‘Whack-A- Mole’, where you have to hammer down a mole each time it pops up from a new hole. New problems popped up constantly, and we were hammering away.” 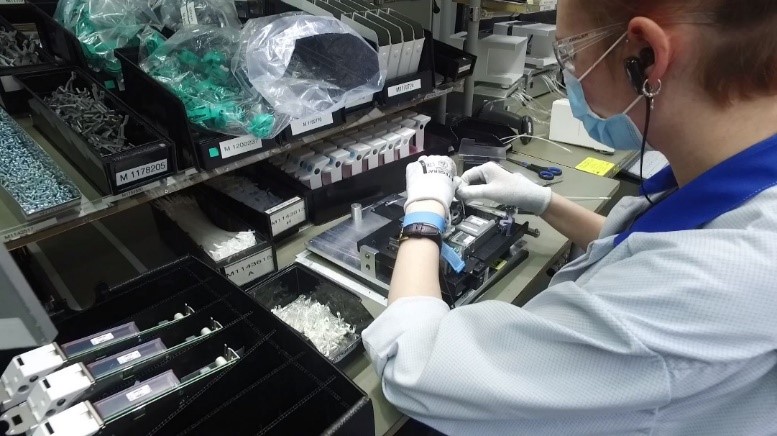 “At one time, for example, we had supplies getting stuck at the customs in India; they were working on reduced capacity due to COVID-19 infections at the customs. It’s frustrating when you badly need components for building monitors. We had to call them every day for two weeks before we could finally get them out.”

“And then I haven’t even mentioned the problems with cancelled flights, which was a logistical nightmare of its own. We often had to charter our own planes, and we had cargo planes going from Asia to Europe and from Europe to the US, almost on a daily basis with components and readymade monitors,” says Juho Niskanen, who is service operations leader at the factory in Vallila.

“Tiger Teams made it work! Soon we were producing in three shifts on a 24/7 basis where in normal times we only work one shift.”

In normal times Juho leads a team of 30 colleagues in the service center. When the pandemic began to evolve, he was asked by Pekka Huovinen, Plant Manager of the Helsinki plant, to lead a new and special type of cross functional teams in order to ramp up the production capacity quickly. Tiger Teams they are called, and already in March the first increase in production began:

“Tiger Teams are a concept where different functions participate and collaborate – sourcing, product management, manufacturing, quality control etc. We had our first Tiger team meeting on 23 March, and this continued on a daily basis for the first couple of months. In the beginning we also formed sub Tiger teams for focusing specifically on areas such as manufacturing, materials and capacity. And the Tiger Teams made it work! Soon we were producing in three shifts on a 24/7 basis where in normal times we only work one shift.”

“This is perhaps the biggest learning I’ve had during this period and we hope we will continue to use and develop – it is effective to not only think out of the box but also to think out of the siloes, so to speak. Blending people with insights from different functions and areas is definitely something to explore moving forward,” says Juho Niskanen. 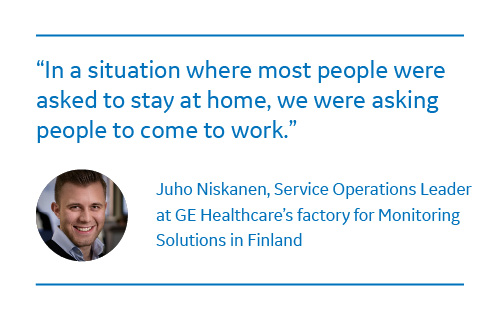 “In a situation where most people were asked to stay at home, we were asking people to come to work.”

During the second quarter of 2020, the Vallila factory was able increase production with more than 150 percent compared to the same period the year before. And components from suppliers around the world weren’t the only thing needed to make this happen. It was also necessary to quickly hire new employees – a lot of them, more than a hundred. Even though robots are used, the majority of the assembly is made by humans.

“In a situation where most people were asked to stay at home, we were asking people to come to work. And as all hands-on deck wasn’t enough, we also had to hire a lot of new colleagues to try and meet the demand. So, we spread the word on social media and asked people to spread the message on our behalf. We took contact to other technical industries in Finland asking if they had layoffs, as we had an urgent need for skilled production workers,” Juho says.

“You can only win if you make sure you act as a team.”

“A main concern was to maintain our strict quality standards, we can never compromise on quality. Fortunately, we have good learning practices in place as well training material, and we even use artificial intelligence to reduce calibration lead time for gas measurement devices. The Lean assembly processes we have used for the last decade is also an important factor, enabling us to ramp up production massively and quickly.” 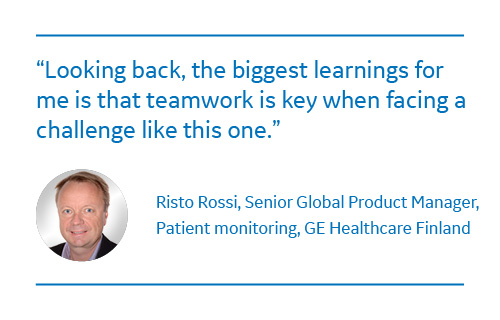 “Looking back, the biggest learnings for me is that teamwork is key when facing a challenge like this one. It’s not that I’m surprised by this, but I’m more convinced than before that you can only win if you make sure you act as a team and that everybody feel they are part of the team. Another thing I will take with me going forward is that the decisions must be based on facts and solid data and that you must be prepared to communicate this in a transparent way. There can be a lot of feelings involved when a pandemic evolves rapidly. But the best way to fight it is to rely on data, always,” says Risto Rossi. 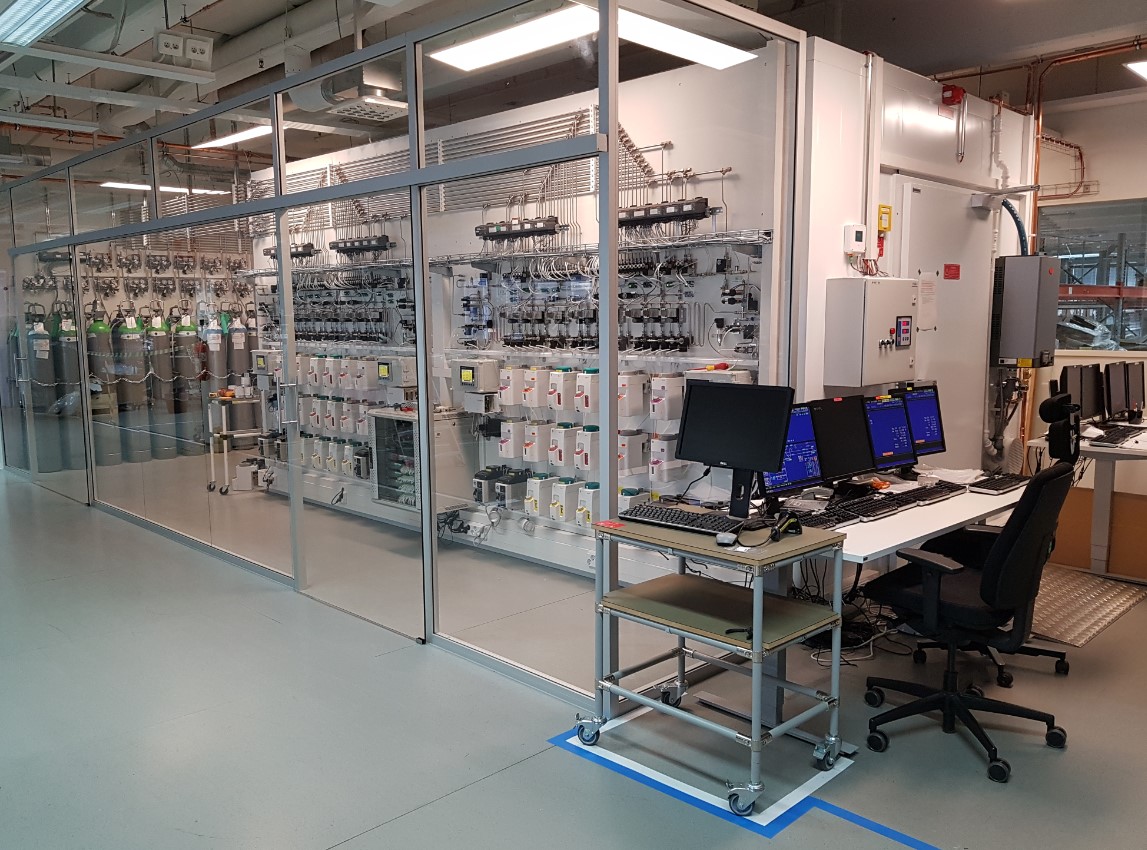 The calibration chamber at GE Healthcare’s factory in Finland where each and every gas module needs to spend up to 4 days, to make sure they are correctly calibrated to be able to measure the gases correctly in all altitudes and temperatures. 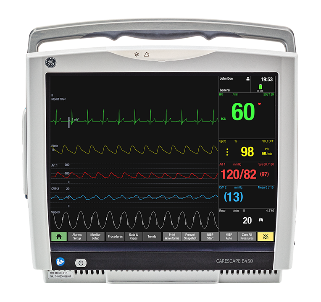 GE Healthcare Finland built a new production line for the CARESCAPE™ B450 patient monitor – in just two days, to meet the demand in patient monitors from around the world due to COVID.